One of the joys of turning is being able to share our creations with others. Not only do we see the creativity of our members but it inspires us to push our own boundaries. Be the catalyst for the next Picasso...

Taken at Gros Morne National Park, NF
"I was debating if this burl was too heavy to take home"
Email Sam
Sam Lewinshtein is an Ottawa dentist and a woodturner.He is a graduate of the University of British Columbia dental faculty, and holds a B.Sc. from McGill University.
Sam spends his time working on a woodturning lathe, which he uses to create beautiful objects of art, such as bowls, vases, hollow forms and sculptural turnings made of wood. His most recent works incorporate delicate carvings of hollow forms.
Sam uses a varity of local woods, such as: maple, birch and cherry. He has a particular interest in ΄burls΄ which are an irregular growth on a tree trunk or root, and display a remarkable beauty of the wood΄s grain.
Each turned shape is a one of a kind artistic design.This is achieved by complimenting the inherent beauty of each burl, with a design that has unique colours, woodgrain, voids and bark incorporated into it, to expose the wood΄s natural beauty.
A number of Sam`s artistic woodturnings have won prizes in woodturning competitions.He is a member of the Ottawa Valley Woodturners and the American Association of Woodturners.

email Kathy
It took over a year for me to turn on the lathe that I was given by a friend but I haven't stopped turning since. I am a retired elementary school teacher and enjoy spending time in the workshop with my husband, Lawrie, who has helped me solve problems, become confident using machinery and learn about wood characteristics.

Having learned skills from friends in the Valley Woodturners club and from World of Wood Turners and others, I have made a great variety of turned pieces. I am a member of the artists in the Kanata Gallery

email Vic
Vic Buxton, M.A.Sc. P. Eng. had a long and distinguished career (33 years) with Environment Canada, mostly in executive-level positions and was Canada’s Chief Negotiator for almost all of the Environmental Treaties including the Earth Summit held in Brazil in 1992. He left Government in 1999 and since that time has been traveling extensively as an International Consultant working for the World Bank and a series of United Nations Agencies (UNEP, UNDP, UNITAR, UNIDO). He has worked in 68 countries to date, where he evaluates programs, project performance and evaluates and recommends results-based management systems and accountability mechanisms.

Vic has been the recipient of numerous awards both in Canada and abroad: Environment Canada Award of Excellence (1987); UNEP Citation of Excellence (1988); Government of Canada Award of Excellence (1989); Canada 125 Medal (for service to Canada) (1993); UNEP/Austrian Government Ozone Layer Prize (1995); USA EPA Ozone Award (1996); Environment Canada Award in recognition of Leadership on culminating negotiation of the $82 Million USD India CFC Phase-out (1999); Natural Resources Canada Biotechnology Award (2000); for leadership contribution to the development of this emerging sector; Recipient of UNEP “Visionary Award” for outstanding contribution to the protection and preservation of the Ozone Layer – Sept 2007. He has been featured in the Ottawa Citizen as an environmental innovator whose life has made a positive difference to the planet.​

Vic joined the Valley Wood turners in 1999 and is now on his third lathe scaling up as lathe shortfalls became apparent. Although visually impaired part time turner (due to his ongoing consultancy work), he has produced a large assortment of plates bowls, vases, and hollow forms. He also makes cigar pens to pass out as gifts to his clients in developing countries. His interest over the last few years has been with regard to segmented turning and is the only person in the club currently creating 24-36 inch high open and closed “floor vases” which pose severe technical challenges due to the extreme extensions from the headstock. Some contain as many as 830 glued pieces. He has created a number of jigs to facilitate the creation of these floor vases and is willing to share his knowledge and experience in this area with club members.

Growing up in southwestern Ontario, Garry liked to explore the local Carolinian hardwood forests that were still quite extensive. He developed a lifelong passion for trees and has devoted the last thirteen years to the full-time creation of wood-art. He lives in Ottawa where he has retired from a career at the National Research Council. There, he studied nuclear decay and developed methods and equipment for the accurate measurement of radioactivity. The innovative skills he acquired and honed, he now applies to artistic woodturning.

His artistic creativity is expressed in techniques he has developed in his studio, such as dyeing, carving, WoodSong Woodlace, wood and metal inlays, fluting and the incorporation of stone.Garry is a member of the American Association of Woodturners and his work has been featured on TV, on the internet, and on the June 2002, March 2003, and September 2007, covers of Lee Valley tool catalogues. He holds a number of awards, including several firsts in the master’s category at the Ottawa Wood show. His work is held by collectors, both private and institutional, throughout the USA and Canada.

Garry says:
"I delight in the smooth feel of the wood in my hands, and find excitement each time I look inside a piece of this varied and beautiful material. With wood artistry, nature is the true artist; I just do the gift-wrapping!"

Gunilla and Paul Matteau
​Gunilla and Paul Matteau are a team in every sense of the word. Gunilla is the "artiste par excellence" in her use of colour. She has done extensive research in materials and tools in order to express her artistry and is always looking for new ideas and new techniques. She is as well versed in the use of colours as she is in carving and pyrography. Gunilla gave our club a wonderful session on the use of colour a while back which can be found on this site΄s Technique page. It is well worth reading.

And then, there΄s Paul! Coming from an engineering background, everything Paul does is calculated to the "nth" degree. In a few short years, he has mastered numerous aspects of woodturning. His segmented works and his pepper mills reflect his great attention to detail. Paul also possesses excellent administrative skills and he has served as president of the Valley Woodturners for the past 3 years.

Both Gunilla and Paul are partners in "The Grotto Artworks" along with other local artists in Merrickville, Ontario, Canada

I turn a little of everything, vases and bowls, pens and other spindle work, jewelry and toys. I always try, as much as possible, to use reclaimed lumber. Most of my pieces have some natural defect or blemish but these are often what gives character to an otherwise dull piece. No two pieces are alike or offer the same challenge.
Check my web site for articles on a variety of subjects pertaining to woodworking and various rants on pet peeves, such as the ridiculously high cost of replacement batteries for power tools and how to get around that! 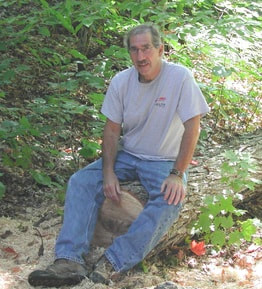 Larry Katz  turns a variety of domestic woods, using mostly already fallen trees from eastern Ontario and western Quebec. While Larry produces a variety of forms reflecting his personal approach to balance and proportion, he is best known for his functional salad bowls and platters. Found on tables and displayed in homes across Canada and internationally. Larry’s turnings are pleasing to the eye, feel good to hold, and are beautifully finished. They not only serve as attractive vessels for salads, fruit and hors d’oeuvres, they also eloquently illustrate the life history, figure and grain patterns of trees.
Following his retirement as national research director of the Canadian Union of Public Employees, Larry has been turning full time for more than a decade. He is now considered an advanced turner. Larry regularly shows his work at artisan and craft shows and galleries. He maintains a gallery and workshop at his family home in Ottawa.
Larry is an active member of the Ottawa Valley Woodturners Club and served on the executive for many years. Larry is also a member of the Ontario Crafts Council and the American Association of Woodturners. He regularly contributes to the World of Woodturners, an online membership site begun in Canada that brings together woodturners from around the world. 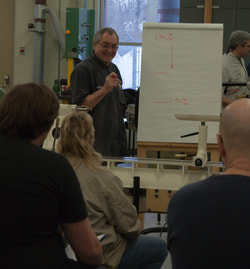 Lance Besharah is a high school music and technology teacher currently residing and teaching in Brockville , Ontario. He holds a Bachelor of Arts in Music Education from St. Francis Xavier in Antigonish, N.S. and an Honours Technology Specialist qualification from Queen's University in Kingston, Ontario. He is also the Music Director for the Brockville Concert Band.

He was first introduced to the wood lathe at the age of 15 on a visit to his grandfather's house where he made a chess set on a home made lathe using old files ground as scrapers. After graduating and teaching music in Nova Scotia, Lance returned to Ontario (Brockville). Finding no jobs available in music, he started a custom cabinet making business in 1980 which he successfully operated for many years. During this time he began to rekindle his interest in the wood lathe producing many pieces for friends and family. Throughout his time as a cabinet maker, he mentored students as part of the local high school's coop program. As fate would have it, his shop burned down (1995) at the same time as an opening for a construction tech teacher became available at the high school which he accepted. Within a few years, the music teacher position became vacant and Lance now had the opportunity to marry all of his loves in one place at the same time. Beginning in 2007, Lance has been available as a demonstrator and teacher to pass on his knowledge and passion for his art. In 2011 he became the lead teacher for the Valley Turners Club in Ottawa seeing 30 students each year.

In 2005 he joined a local Arts tour. Since then he has also joined many other Arts organizations and has participated in many workshops and exhibitions. Beginning in 2007, Lance has been available as a demonstrator and teacher to pass on his knowledge and passion for his art. In 2011 he became the lead teacher for the Valley Turners Club in Ottawa seeing 30 students each year.

In 2012 Lance retired from his teaching position with the Upper Canada District School Board and opened a woodturning school and gallery.